Visitors 1564
Modified 26-Oct-18
Created 22-Mar-11
43 photos
APCM followed up on its Presflo fleet see by using the higher GLW to introduce 284 LA wagon between 1961-5. They were one of the very few successful designs to be built of Aluminium so giving a low tare weight and high gross load/tare ratio of approxiinately 4.2 to 1.
The wagons consisted of aluminium bottom discharge tanks of 27 tons nominal capacity rigidly mounted on 4-wheeled steel or aluminium underframes of 15 ft. wheelbase. The original batch of 190 wagons, numbered LA 0001 to LA0190, was built in 1961 by the Gloucester carriage and Wagon Company, Ltd. The wagons were fitted with eyebolt and rubber auxiliary suspension, and originally incorporated 8-plate laminated springs; these were very stiff and, in combination with the naturally stiff tank body, produced a torsionally stiff vehicle which was prone to derailment when running empty. The suspension was then modified twice, in consultation with the British Railways Board, first to incorporate softer 9-plate springs and later 10-plate Duplex springs. A further batch of 94 wagons, numbered LA 200 to LA 293, was built by Metropolitan-Cammell Ltd. between 1963 and 1965. These wagons are fitted with a double-link suspension of the International Union of Railways (U.I.C.) type. The suspension was designed by Metropolitan Cammell and incorporated 15-plate laminated springs; the tyres had Continental tyre profiles.
Being vacuum brake they went out of use in the later 1980s. Collection includes an official photograph when new. 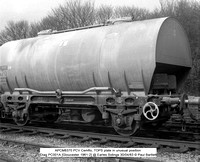